You are here: Home / Band Members Stories / Steve Horn / From Cage to Binchois–Early too Late 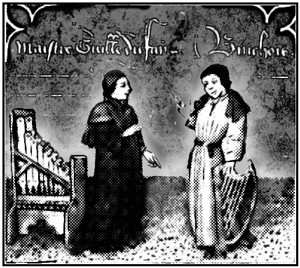 At North Texas, Steve was exposed to the huge gamut of classical music. The areas that piqued his interest the most were found at opposite ends of the historic timeline, early music and music of the 20th century (not yet having entered the new millenium). There were composers and styles he favored more or less in any given era but Steve’s real love and sense of belonging gravitated on one end to the likes of John Cage or Harry Parch while at the other end, the likes of Baude Cordier, Gilles Binchois, John Dunstable or Heinrich Isaac. Of course, depending on who Steve played with or studied under, more names and styles would add to the mix.

Since there was no guitar program at North Texas at that particular time, Steve took a common route for guitarists of the day by majoring in composition thus diffusing the focus on his instrument and spreading his attention to a variety of instruments and sound sources. The styles he embraced allowed for a variety of application of the instruments he did play and Steve found occasion to integrate these historic poles into new and intriguing combinations.

Steve found himself playing a host of Medieval and Renaissance winds and strings which would by practical application divert his path in public performance. Rock and jazz began to fade away as eventually did mainstream classical. Steve became more adept at recorder, curtal, harp and lute.

Story continued with The Renaissance Buffoon…

A Creative Art STUDIO, a retail Art Gallery and working studio opened in Denton, Texas in the late … END_OF_DOCUMENT_TOKEN_TO_BE_REPLACED

Oui Bis loves playing on some Saturday mornings at the  Denton Community Market, a producer-only … END_OF_DOCUMENT_TOKEN_TO_BE_REPLACED