You are here: Home / Authority Certification / About the Author

Steve Horn began playing music as a young child and has studied music all his life. He began with interest in the folk music movement, but with the British Invasion of the ’60s, Steve’s attention shifted more towards innovation and exploration. Steve studied music at the University of North Texas, gaining an ever-widening exposure that eventually settled into Early Music and the study of a variety of world folk traditions found throughout Europe and the Americas. This led to his interest in Celtic Music, American Old Time, and Blue Grass. His instrument of choice was mandolin.

When the New Grass movement took root, Steve witnessed top players demonstrating virtuosic capabilities, incorporating new sounds and styles. Yet the traditions from where these performers came, relied stylistically upon the use of open strings. Many musicians were attached to a limited number of keys. Some had difficulties moving up the neck, beyond first or second position. Steve yearned to expand upon the traditions he loved.

So Steve set out to build a system of understanding that he could put into practice. From his knowledge of music theory and his association with a wide range of styles spanning folk, pop, rock, jazz, and avant-garde, Steve came up with a system for the mandolin and instruments of similar tuning that could free him and his associate musicians from the confines of the “CAGED” keys and from attachment to open strings, thereby opening the door to playing in any key and making use of the entire fretboard.

The method is called “Scarpology” and is outlined it in his book Scarpology: A Mapping of the Fretboard and an Introductory Method for Improvisation on Mandolin or Other Instruments Tuned in Perfect Fifths. 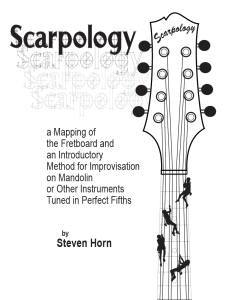