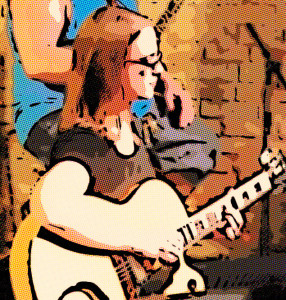 Maristella Feustle was born in Toledo, Ohio in the disco- and Gremlin-infested summer of 1979. Presumed to have been conceived in Toronto, she has not been back to visit since.

Her dreams of NFL stardom thwarted by a career-ending gender, Maristella set about being That Kid in grade school who actually enjoyed school, including music class. Her love of singing landed her in the children’s choir; one thing led to another, culminating in a passive-aggressive war of attrition over piano lessons and practicing. Here, her older sister provided a crucial assist through her interest in bass guitar, thus setting a precedent for the younger sibling to get a guitar.

While normal children circa 1990 were going wild for the New Kids on the Block, economics correspondent Irving R. Levine, and who knows what else, Maristella was fascinated first with the music of Aerosmith, and then Stevie Ray Vaughan. The latter led to reckless experimentation in the full scope of blues music, which was a gateway drug to jazz, and laid the groundwork for a lifelong fascination with Texas.

Her education culminated in a Life Experience Degree from the Perfectly Normal University of the Cayman Islands, with degrees in jazz guitar and library science to cover the hole in the wall she adamantly insists she had nothing to do with. Ground-breaking research during her year of living in Dallas pinpointed the precise location of Purgatory to the intersection of I-635 and Skillman St. It has a Denny’s.

Oui Bis loves playing on some Saturday mornings at the  Denton Community Market, a producer-only … END_OF_DOCUMENT_TOKEN_TO_BE_REPLACED

A Creative Art STUDIO, a retail Art Gallery and working studio opened in Denton, Texas in the late … END_OF_DOCUMENT_TOKEN_TO_BE_REPLACED