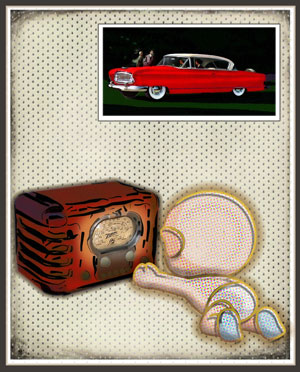 As an infant, Steve was very quiet. He didn’t speak when Dr Spock said it was time which made Steve’s parents worry. But soon enough, Steve awakened to the concept of conversation. Mother’s and Father’s worries were cast away by a blast of wind that would dispel any suspicion of shyness. Steve became the neighborhood conversationalist and thus was borne the method of presentation that is consistent to this day.

Baby Steve would sit rocking in front of the Hi-Fi with intent fixation. While Johnny Mathis, Andy Williams, Nat King Cole fill the room, the little green dial brightens and dims in response to the signal strength of the latest technology, “FM”. Hours in front of the mahogany console on a steady diet of easy listening, Steve was anything but content, wiggling to the pulse, spurred to learn, to crawl, walk, talk, sing and play. There would be many stages to work through.

As a lad, when Steve was taken to grownup gatherings where real musicians were present, the same intent focus was there. One musician, on his way to break, commented to Steve’s mother, “I think you have a musician there.” This was a big pill to swallow for a young mother, the daughter of a pragmatic Midwestern poulter who married a lofty, yet beautiful pianist. The genetic traits that sometimes skip a generation sit quietly before the narration of a young Rod Serling. The mother remains quiet, watching her handsome son, listening to the story of their lives.

Many distractions later, Steve begins to find his own identity during the dawn of rock and roll. He somehow took the notion that Elvis was a renowned guitarist. Thus began Steve’s pursuit of plucked strings and his walk into a world about to change beyond anyone’s imagination.

Rawson's BBQ is now Tailgater's BBQ and under new ownership. We wish Tailgater's all the luck in the … END_OF_DOCUMENT_TOKEN_TO_BE_REPLACED

Oui Bis loves playing on some Saturday mornings at the  Denton Community Market, a producer-only … END_OF_DOCUMENT_TOKEN_TO_BE_REPLACED