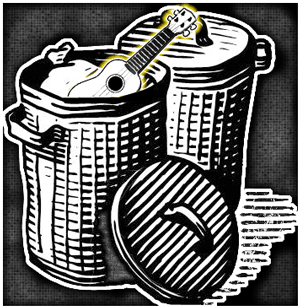 …continued from Early Hopes and Dreams

Bustling with energy, young Steve was a bundle of ideas and a mouthful of words, therefore a handful for kindly neighbors. Up the street, Ted Minor was an icon of compassion and in the spirit of giving was sure that with each visit, there was a cookie for each hand. This helped to keep Steve out of mischief and his banter somewhat muffled.

The Minor’s teenage kiddos were typically annoyed with young Steve. Ted’s insistence on cleaning house led to the teenagers getting rid of a plastic ukelele that had fallen out of use. Steve could not believe it when his eyes fell upon this glorious treasure sitting atop the heap at the curb.

Thus started two new trends for Steve: a life of music AND the notion that one man’s trash is another man’s treasure. Many treasures were to come his way but this first find was the most significant. Little did young Steve know that this discovery would have profound influence on the rest of his life.

Likewise, the Minors inherited the benefit of a lasting distraction that kept Steve out of their hair, at least until Steve learned a few songs from his first Mel Bay book. No cookie could muffle these verses. So Ted resorted to a generous supply of bubble gum. No hands required, plenty of chew time, and a suitable vice for someone still too young for cigarettes.

Rawson's BBQ is now Tailgater's BBQ and under new ownership. We wish Tailgater's all the luck in the … END_OF_DOCUMENT_TOKEN_TO_BE_REPLACED