…continued from The Renaissance Buffoon 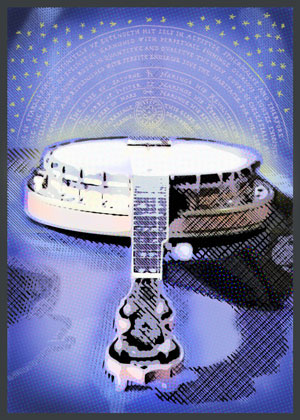 Steve had played Early Music for a number of years, a day-job or two and a couple of marriages. One Friday evening after a day of work in the hot Texas sun, Steve dropped by the local music/pawn shop for a set of strings when he met the next love of his life.

What an intriguing instrument, beautifully adorned, affordable and with a hardshell case. Steve blinked in astonishment as he considered, for the first time, taking up banjo. There was no time for second guessing, the money was doing no good in his pocket. He went home to say, “Honey, look what followed me home.”

Truthfully, Steve didn’t know what to do with it. How do you tune this thing? It’s all backwards. It weighs a ton. It definitely sounds like a banjo. Steve found his way on this new implement of torture. In fact, he became pretty darned good on it thus leading to his involvement with American Old Time, Irish jigs and reels, sessions, and contra dance music.

Steve had no tutelege, no focused guidence in a particular tradition. He didn’t know to distinguish between Bluegrass and Clawhammer. He didn’t know that this 5-string variety wasn’t used in Irish music. So with this ignorance, he set out to astound critics and supporters with a mixture of forbidden faux pas and convincing success.

Oui Bis loves playing on some Saturday mornings at the  Denton Community Market, a producer-only … END_OF_DOCUMENT_TOKEN_TO_BE_REPLACED