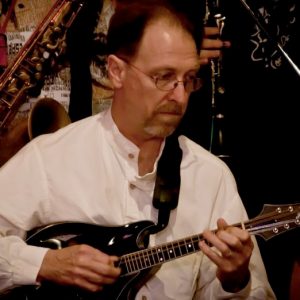 Steve Horn is a founding member of Oui Bis and has played with members of the band in previous incarnations for over a decade. These incarnations include The New Potatoes, The Band with No Name later known as Swat the Flea, Tuberville and the current Oui Bis. The earlier bands focused on either Old Time or Irish reels, jigs, hornpipes, shottisches and waltzes. With Tuberville, Steve urged other members to allow him the freedom to write original tunes as well as variations on the classics. This continues with Oui Bis, where Steve and Leon add other styles to their repertoire including old standards, tin pan alley, and an assortment of jazz and folk music from Latin America, Eastern Europe and Asia Minor as well as more recent compositions from American instrumentalists.

Steve has been on this Earth for a little while and never has been known to be short on details. Therefore, for ease of understanding, a matter of convenience and with respect to the reader’s time, he has broken up his story into parcels. Readers can skip over the boringest of details and go straight to their area of interest. Steve maintains that it is all very interesting, thinking people will want to go back to their favorite spots again and again. This could be debatable but none-the-less is a choice.


Look for Us at These Venues

A Creative Art STUDIO, a retail Art Gallery and working studio opened in Denton, Texas in the late … END_OF_DOCUMENT_TOKEN_TO_BE_REPLACED